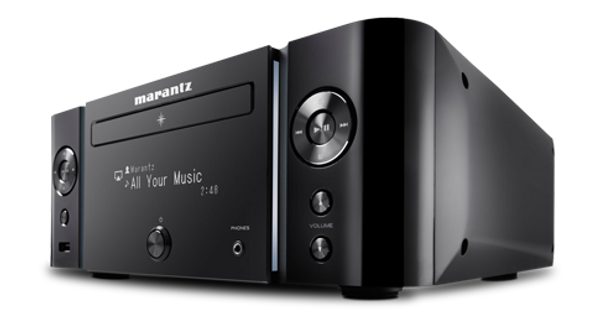 Featuring a broad range of listening and streaming options, the Marantz M-CR611 Network CD Receiver is now equipped with both Bluetooth and Wi-Fi wireless audio streaming functions including Apple AirPlay, and features popular streaming services including Pandora, SiriusXM and Spotify, along with delivering thousands of internet radio stations from around the world.

The M-CR611 features a built-in disc player that's compatible with music CDs, CD-R and CD-RW recordable and erasable discs and is also equipped with an AM/FM tuner.

Featuring 4 high efficiency digital audio amplifier channels, the M-CR611 lets you connect 2 pairs of loudspeakers, and now features the ability to control the volume level of each speaker pair independently. You can also configure the M-CR611 to drive 1 pair of speakers with double the power output, or drive a pair of bi-amp compatible audiophile speakers.

The M-CR611 comes with a deluxe ergonomic remote control and is fully compatible with the Marantz Remote App, which is available in iOS and Android versions.

Featuring dual diversity antennas, the M-CR611 lets you stream your favorite audio tracks wirelessly via Wi-Fi and Bluetooth. The dual diversity antenna system ensures stable streaming even in congested urban environments, and the Wi-Fi function features 802.11 b/g/n technology for compatibility with the widest range of smart devices. The Bluetooth function includes NFC pairing by simply touching your device to the "N" logo on the side panel, and the M-CR611 also features quick and easy push button Wi-Fi Protected Setup and simple iOS Wi-Fi sharing.

A World of Internet Streaming Options

Enjoy a huge selection of music from popular streaming services including Pandora, SiriusXM and Spotify, as well as listen for free to any of thousands of internet radio stations from around the world.